1. Meteorology in Ireland at the end of the 19th and start of the 20th Century.

During this time there was a great explosion of interest in the sciences. Meteorology and astronomical observations often went hand-in-hand at various observatories in Ireland such as at Armagh and Birr (Parsonstown as it was also called). Meteorology though was very much the preserve of the landed gentry who were able to provide both the manpower, physical site, and equipment on their large estates such as at Markree Castle, Birr and Kilkenny Castle.

Ireland was a very unequal society at this time and there was of course a huge contrast between the living standards of estate owners and the poor farmers of the west of Ireland struggling to put food on the table during the Land War or the vast numbers living in tenements in Dublin in 1916. Markree Castle (pictured below) was one of the first climatological stations established (1824). From 1875 onwards, there was a continuous record of observations. In 1881 Markree registered the lowest temperature ever recorded in Ireland. But when I think of the observers taking their observations, I cannot help but be cogniscent of the contrasting living conditions of those less fortunate at the end of the 19th century in the northwest of Ireland (second pic below of an eviction scene in Donegal, the same year Markree recorded its lowest temperature). 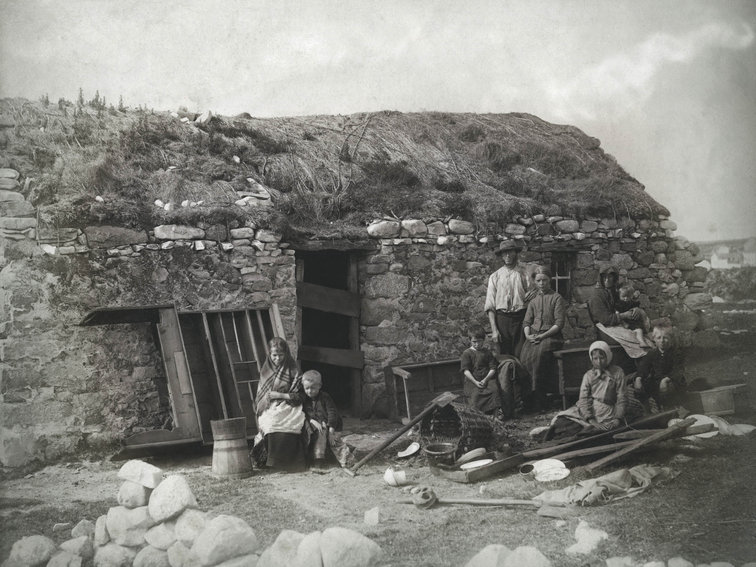 By cruel irony the very science being measured (ie the weather) was to play a large part in the social unrest in Ireland in the 19th century. There is a common misconception that temperatures throughout the 19th century were very much lower than they are now. This is certainly true for the early and later decades, however around the middle of the century conditions had softened. These milder conditions, especially at summer unfortunately led to the spread of the potato blight in the late 1840s. By the 1870s however the weather deteriorated again and in 1879 following one of the wettest years on record, there was yet another famine.

Meanwhile around this time the Victorians set about establishing a network of weather stations across Ireland. Many e.g Markree Castle, were still in operation at the time of the rising. Others like Kilkenny Castle had ceased operation. They had the foresight to lay down a new standard for meteorological observations that has now become standard the world over.  During the 1880s the Stevenson Screen became the preferred standard screen to shield thermometers from sunlight and radiation. They introduced inspections and paid particular attention to calibration. They produced meticulous detailed reports, which have enabled me to compile this article.

Mean annual air temperatures were considerably lower during this period in Ireland compared with more recent times. Records from the Phoenix Park show that several years had mean annual temperatures less than 9 C. That is over 1 C colder than the annual mean temperatures now. To put this in context, the most recent cold year we had in Ireland, 2010, was still warmer than half of the years during this decade. To get an idea of the climate at the time,  you could compare it with the last great cold year we had in Ireland, 1986.  Several years (1910, 1912, 1915, 1917, 1919) were like that cold year. See chart below courtesy Met Éireann:

It was not until after 1920 that we saw the first warm year in ages (1921). That year would stand very much on a par with the annual temperatures we have seen in Ireland since 1990. Thereafter there was a slow rise in mean temperatures until the 1960s.

Annual rainfall totals during this decade were not unlike those we have seen since the year 2000. There was one standout wet year in Dublin when the total exceeded 1000mm and that was the year 1916. It would take another 40 years or so before Dublin saw a wetter year. But these conditions were not the same all over Ireland. Figures from Valentia, Co Kerry show however that the year of the Rising was not a wet one down there. Their wettest year was two years earlier in 1914.

The winters preceding and following the Rising saw plenty of snowfall. During Winter 1917, the worst snowfalls of the 20th century occurred (even worse than 1947). At the end of January, the south and west of Ireland was paralysed with snow and persisted well into February. An even worse snow storm struck on the 1st April 1917. Snow lay to a depth of 1.3m and with 3 metre drifts.

Temperatures overall for the month of April 1916 were a little below the then norm. Rainfall was above normal for the month. Especially so in the south west and north west with Killarney having 182% of the normal monthly rainfall and Markree Castle, Sligo having 238% of normal. At Killarney there was 41mm on the 23rd and 46mm on the 24th (the day of the Easter Rising). Sunshine was also in short supply.

But the cool/wet conditions did improve at the end of the month. The improvement first emerged over Britain, after the 24th. But the warmth did not reach Ireland until the 28th.The warmest temperatures of the month were 20.5 C (69 F) recorded at Waterford on the day of the surrender, and also at Killarney on the 30th. For Dublin, the start of the week was dull with some rain, but very little rain after Tuesday as high pressure started to build up from the south.

Sunday 23rd April (the day before the Rising) :

The chart below shows that it was a reasonable day with low pressure to the north and High pressure to the south giving a southwest flow with one or two showers. However late in the day rain moved into the west of the country. Valentia recorded as much as 27mm overnight.

***Note: In these charts the figures for temperatures are in degrees Fahrenheit.

Easter Monday 24th April (the day of the Proclamation) :

The chart below shows that pressure had fallen and the rain that fell on Sunday night in the west, had now moved eastward. So Easter Monday was a dull day with outbreaks of rain and a strong south to southwest wind. It turned milder though with the rain. Figures below are from the station at Birr Castle (as we don't have the Dublin reports for the rest of the week).

The chart below shows that the strong southerly winds were now moving away into Wales and winds over Ireland were now settling down into a slacker, cooler northerly direction. It was a cool, dull day but rainfall totals were much smaller than Monday.

The chart for Wednesday morning shows that the low pressure is now situated to the west of Ireland with high pressure holding firm to the east with mostly light winds from the south or south east. It was dull in the west with some scattered outbreaks of rain but dry in the east with some nice sunshine.

High pressure continued to build up over Ireland. Winds became light northerly. It was a dry day with some sunshine and temperatures between 11 in the north and over 15 inland and on the south coast. Dublin's max was circa 12 to 13.

This was the final day. The day the rebels surrendered. High pressure was now centred over Scotland bringing in easterly winds. It was another dry day with many parts having over 10 hours of sunshine.  It became warm well inland and in the southwest but despite the sunshine it was cool near the east and northern coasts with maximum temperatures around 12.